Thank you Helen Chernikoff for inviting me to post on this great new online forum in the Jewish community. It’s a place to talk about disability issues – with honesty and passion. 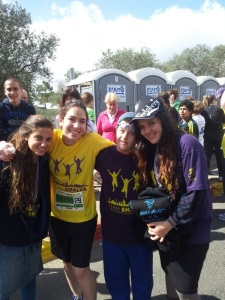 I’m an angry mother. I’m also a dedicated mother, and an all-or-nothing mother. Tiger mother? She’s got nothing on me. She’s too busy seeing that her kids become concert violinists, go to Harvard, come up with a cure for cancer and change the world. Pfft – that’s the easy stuff. The road to Carnegie Hall may be paved with hours of tears and practice at her house, but I invite her to join me on the Yellow Brick Road, where each brick is paved with sweat, tears, and wet sheets. Lots of laughter but lots of laundry, too. Me? I’m making sure that my kid is always treated with respect and caring, and kindness, don’t forget kindness, especially when your child requires significant help with simple, everyday activities.

Newsflash. The world doesn’t like disability. The world likes ability and uniformity. Funny how much we relish being the same. Visit any major city these days and note how much the world dresses the same, eats the same junk food and shops in the same chain stores. Walking, talking, going to school, getting a job, doing as you’re told – one nice uniform row of people going in and one nice uniform row of people going out. That’s what we’re asked to do, and what we’re asked to produce when we parent. After all, we can abort those who show themselves already in utero to be of questionable quality and convince ourselves that we’re doing it to prevent them – the unborn fetus – and ourselves, pain and suffering, that it would be too sad or too hard, or too complicated to live our lives otherwise. So why do we raise our eyebrows when we read about hate crimes? Those people were just acting on that basic human impulse buried deep inside us. Blame the world’s woes on someone else and if you can, get rid of them. They’re just dragging us down.

It all started with a conversation I had with my son’s afterschool program, which serves about 150 kids and teens with disabilities, many of them significant, everyday, year round.  It’s a great program, run by dedicated, wonderful people, even though I wish it was a bit more inclusive in its methodology. His current group of guys is being closed for logistical reasons. I wasn’t happy to hear of this mid-year change and was upset to hear that instead of offering my son and his buddies a chance to integrate into groups with kids who have better independent living and social skills, they were separating them into two different groups, a sort of motley mix of kids, who don’t seem to fit in with ease anywhere else.

I asked if we could try him out with a group of older and seemingly more capable boys (most of the groups are separated by sex as the program serves a predominately religious clientele). I was told, as I have always been told, that he would be lost in the shuffle, shunted aside socially because of his limited social and verbal skills. I can believe that. But the next day, I was stunned to find out that more than half his new group has mobility issues – meaning they have problems walking and getting around – and at least two are non-verbal.

A bit of background. I co-founded and run Shutaf Inclusion Programs in Jerusalem. We serve close to 120 children and teens, ages 6-21, with and without special needs, year round at our programs; vacation day camps; after school activities; Young Leadership Program for Teens and parent support groups. Shutaf is a place of complete acceptance and inclusion for all kids of all abilities and from all cultural and religious backgrounds. I told the program’s director that I don’t mind a mix of ability and disability. But where’s the other side, those kids who’d help liven up the group by virtue of their language skills and social sophistication? And really, you couldn’t engage me as parent ahead of time, and explain your educational plan and how you structured this group?

So please, be sure and try not to have a kid with developmental delay, what no one wants to call mental retardation anymore, or worse, one with a dual diagnosis, or one who doesn’t quite fit the descriptions and labels used today. Those are the hard ones, the ones who need that other box to describe their particular needs, like my son.

My guy has always defied his labels – good for you, boyo – so, when he’s found wanting, I’m ready to go out swinging, brought to tears by people’s inability to understand that he can be included, that he deserves to be included, that it’s his right regardless of whether he can tie his shoes, or function at a level deemed acceptable by others. I hate the whole high and low functioning thing, sorry.

When that happens, I have to pull out my dukes and fight back. Because I know who he is, what he is and why he deserves his place in the world. And I say so, because I’m the angry mom.