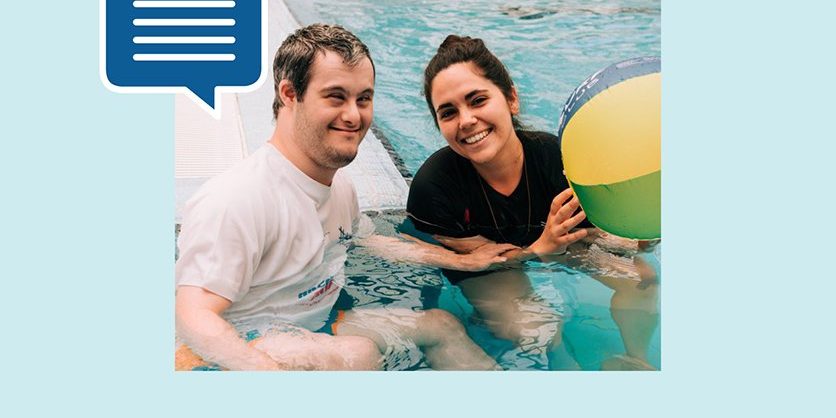 Acceptance. Finding grace. Being chosen. In the Old Testament, we are given many examples of ordinary people coping with extraordinary decisions both ethical and moral.

Sometimes they stumble, such as Moses hitting the rock instead of speaking to it at Meribah, or the children of Israel’s Korach-led rebellion in the book of Numbers. Sometimes they are challenged, as in the story of Abraham’s attempted sacrifice of his son, Isaac, or Esther the Jewess becoming wife to Persia’s King Ahasuerus.

Making choices is what life is about, along with gratitude for G-d’s gifts, even the seemingly hard-to-understand ones. When my youngest son, Akiva, who has Down syndrome and autism, was born almost 16 years ago, many people asked me, “Didn’t you know?” or “Didn’t you test?”

I was 34, almost 35, when I became pregnant for the third time. We lived in Brooklyn, N.Y., in a young, upwardly mobile neighborhood with liberal values and a penchant for Mexican food. Our friends and egalitarian-minded Jewish community were made up of lawyers, doctors and other professionals. Disability was present in the greater community, but there were few, if any, children with Down syndrome. Akiva, who was born at home, was and is a chosen and loved child, despite the surprise of his diagnosis.

In the years since his birth, I’ve discovered that for many, choosing not to test for genetic disorders is simply considered irresponsible. Today, prenatal testing is described as safer than ever, and it can determine many genetic aberrations in addition to Down syndrome. Once you’ve tested and discovered an issue, the most sensible and advised course of action, in my world, is to abort the defective fetus. If you don’t test or choose not to abort, you represent a population that is assumed to be, in the words of a Jerusalem-based writer, “traditional or very observant … couples who refuse to have an abortion … [and] prefer to raise a less-than-perfect child.”

Wow. A less-than-perfect-child. Is that the child who goes out drinking in his teens, crashes up the car and flunks out of school? Or is that the child diagnosed at three with autism, learning disabilities or the new epidemic of our time, depression?

Or worse, is it the child who breaks the law and ends up in jail, lost to his family, perhaps forever? It’s a strange and offensive assumption to make, that parents of children with Down syndrome, a seemingly preventable disability—and let’s stretch that to children with other disabilities as well—prefer our children, imperfect as they may be. And how simplistic is it to presume that a person who lives a religion-based life finds it any easier to accept difference than their secular peers, a sort of “Punish me, I deserve this hardship because of my religious commitment”?

As for preferring a less-than-perfect child, to what, I ask? To their typical brethren? When did we lose sight of the ethical and moral issues here, that these are children who were, certainly in our case, planned and desired additions to a family?

Having come to maturity during the age of a woman’s right to choose, most of my circle considers it their absolute right to choose pregnancy and not have it chosen for them. They chose to become pregnant, and unless that choice led to infertility and its corresponding difficulties, they became pregnant. Once pregnant, they set out to have the perfect pregnancy, complete with appropriate exercise classes, stylish maternity outfits and a skilled practitioner who would deliver said healthy baby at the best hospital when the time came. They wanted their babies, those perfect babies, the ones with the number 10 apgar scores at birth, what they believed was their right to receive.

I won’t deny the at times painful facts of parenting my son. He’s chronologically 15 but operates at a much younger level. He sat up unassisted at 22 months, walked at six and requires assistance for most of his basic needs. He also has an excellent sense of humor, a real knack for languages and an almost encyclopedic knowledge of musical theater, much like our eldest son.

Accepting the birth of or later diagnosis of a child with a disability is a moment of reckoning—for the child, for the parents, for the family, friends and extended community. For many, what initially feels like tragedy gradually becomes normal. Discovering that you are capable of loving, caring and accepting difference has a way of changing you for the better. While there are families who are divided by disability, there are families who are united, learning to support each other through challenge and relishing those special and sometimes long-awaited moments of success.

It’s funny. While I reject the notion that we as a family were chosen “to bear this burden,” or that “it was G-d’s will,” and I hated when people said things like, “Akiva couldn’t have been born into a better family,” I recognized that there was a part of me that did feel that we had been uniquely prepared for this mission, perhaps because of our lifestyle as a homeschooling family or because of our supportive religious community or maybe because Akiva was our third boy—we knew how to do this. We chose not to test. We didn’t play Russian Roulette; we had a baby.

By Beth Steinberg, Shutaf Co-Founder
Originally posted as “Prenatal Testing: Making the Right Choice” in the online edition of Charisma Magazine on June 18, 2013.

Having an Older Child with Disabilities