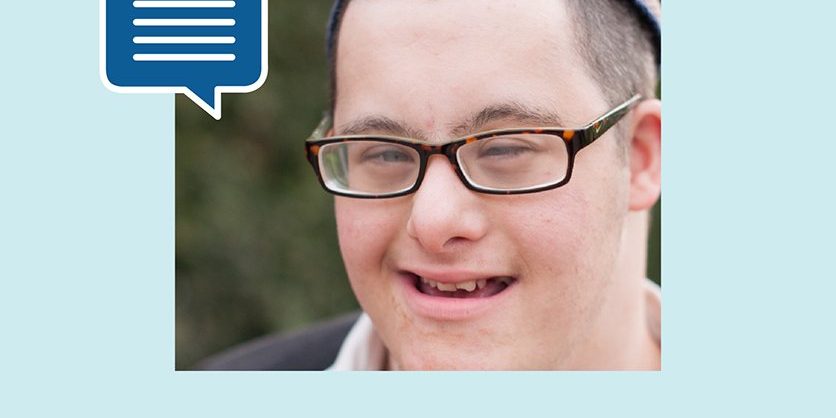 (Akiva and the Missing Glasses: A Never-ending Story of) Disability and Vulnerability

Let’s talk about vulnerability. And don’t go putting your sad and supportive face on, thinking, “Oh, Beth’s about to tell us another Akiva story.”

I am, but that’s not the point.

I’m here in the house, staying cool, doing my happy Friday thing, fruit crisp in the oven, Ira out buying whatever he’s decided we need.

My phone bleeps. Ira’s telling me some story about Akiva’s glasses being thrown off the walkway at school. The teacher called all flustered with some whole ‘meysa,’ or story, which we immediately tune out. What’s the point in listening? Someone grabbed them off of his face. He was clearly not in a supervised space – whatever, can’t supervise everyone at all times – and the glasses landed, wherever they landed, to join Akiva’s other gone-missing-never-to-be-found-glasses that go missing in a given year.

Ira and I, the good Anglos that we are, buy more glasses. Heck, we support Zenni optical, ordering 4-6 glasses yearly.

The school? They do nothing.

Akiva has lousy sight and while he’s kind of cool being out-of-focus in his daily life, we are not. Wearing glasses has been a task that we’ve worked on, assiduously, since he was about 7 years old. It took years for him to accustom himself to them, and indeed agree to wear them. While he doesn’t necessarily ask for them, he gets that they have some use for him in his daily life.

Akiva also, like many of those with Down syndrome, has a small face, little ears, and a minuscule nose bridge, making fitting him in a good looking pair of glasses a challenge. We’ve tried many types of frames, going back and forth between the more expensive stretchy frames with better quality lenses which we buy locally (they fit the best), to cheaper online options that do the job less comfortably.

What’s school supposed to do? I should be grateful, I guess, that Akiva’s not at risk for the stuff that’s standard procedure in Israeli schoolyards countrywide, where tough and even bullying behavior is too often excused as the norm.

Ira and I get that you can’t keep your eyes on every student, and every event that goes down. We really do. But what about Akiva’s vulnerability in this? What about his inability – truly – to protect himself? What happens – and I assure you I worry about it daily – when the boys are all sent off to use the facilities before breakfast? Who’s watching them then?

In an educational system – and this is a worldwide issue I’d say – predominantly staffed by women, at a certain point, boys are left to do their own thing in the bathroom. Builds independence and all that.

If a person is vulnerable, then we must be charged with protecting them.

If a person is vulnerable because of disability or age or illness or whatever, then we must put a plan in place for assuring them their safety. Always, and at all times of their lives – cradle to grave. That’s what social services is supposed to be about.

That’s what building and securing the person’s well being – regardless of specific need or age – is all about.

And in childhood, when the responsibility is shared by many different agents, from school to after school programs to other children’s homes on playdates, that becomes complicated.

Parents presume – or they wouldn’t send their children off – that the these other environments have claimed responsibility for them.

“So, what are you thinking about – for Akiva – after next year?” asked the school advisor recently.

“Nothing,” is what I felt like saying, instead responding in a desultory fashion with whatever the moment required.

I’d like Akiva to live at home with us, until he’s an old man, and we’re even older.

I’m down with keeping the helicopter blades permanently turning over him, Ira and I (with the help of Akiva’s caregiver, Indu), continuing to be in charge of fussing over him, making sure he’s happy and well-turned out. You know, well-fed, well-slept and well-watered, clean-shaven, glasses cleaned, blackheads removed (my job), fingernails trimmed (Ira’s job).

In short, loved and respected. Honored and yes, protected.

We don’t see anyone truly applying for the job.

International Day of People with Disability

August Is The Hardest Month: Disability And Parental Loneliness
Go to Top