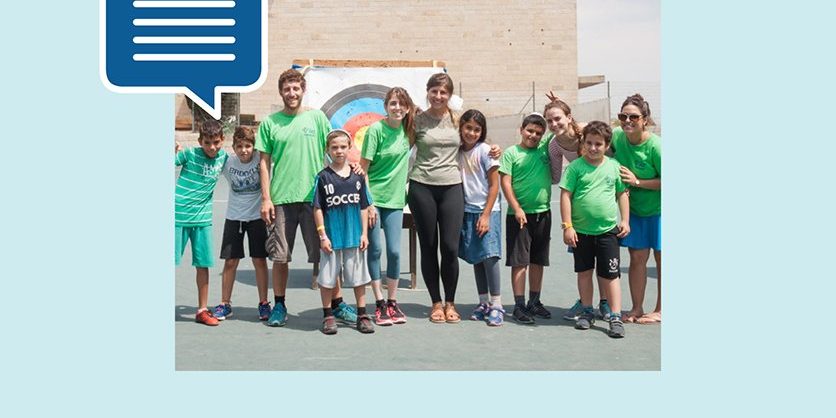 Okay, I know I can be a bit defensive, bristly almost, when it comes to talking about almost anything that I care about. I own that. When it comes to disability and inclusion, I can go a little overboard, but someone’s got to do the dirty work, right?

We were at a meeting: me, my Shutaf team members and with a respected colleague whose expertise is including children with disabilities in educational settings. In a discussion of how to create a program of outreach, education and inclusion for Jerusalem teens, with and without disabilities, she corrected our organization’s definition of what we call inclusion, explaining that facilitating the entry point of people with disabilities into the community of the typical, that is, us, those without a disability, is the only way to describe the term.

I was shocked and upset at having Shutaf’s “reverse-inclusion” model questioned. Okay, maybe a bit defensive too, as my team members pointed out after the meeting. At Shutaf Inclusion Programs in Jerusalem, we serve children and teens with special needs – a broad range of issues are included together – along with their peers who don’t have special needs at a ratio of 3:1. Meaning, those with disabilities outnumber their peers without disabilities, an admittedly unorthodox model. Our aim is to offer the best possible program for both populations, regardless of their differences.

So, when I hear that there’s only one way to include or only one way to define how we include, I get offended. It makes me realize how far we have to go in order to relax, stop defining and just start including. I’m always reminded what Professor Arie Rimmerman, an international figure in the field from the University of Haifa, noted when he visited our summer program last year. He said, forget about definitions and models and ratios, explaining “inclusion means everyone finding their place.” And that means all of us, with all of our issues and frailties, successes and failures, belief systems and cultural backgrounds. I like that, don’t you?

Inclusion has to be a two-way street, an eight-lane highway, and not a four-way stop sign. People with disabilities have limited access to everything: schools, after school, camps, employment, living in the community and beyond. I’m not kidding, here. They really do. “He’s just not independent enough for this program,” I remember being told some years ago about my son. This without even meeting him.  Or, my other favorite line “is he high-functioning or low-functioning?” Funny, you should talk about him with his teacher of the past two years, his best critic but his biggest fan.

Again, it always seems to come down to semantics, as opposed to really making the world a welcoming place for all. Now, in truth, this colleague and I are on the same page, and as we continued our conversation we worked through the chaff, ultimately finding a meeting point that will allow us to reach more teens — with and without disabilities — giving them a chance to see themselves as young leaders, as movers and shakers in the fight for equality for all.

I’m raising the banner for inclusion in the broadest sense. Both my colleagues in the disability community and the rest of the world needs to see my flag, and yours.  Join me and be visible, verbal and upfront about why inclusion matters to you.

Inclusive Thinking will make the world a better place