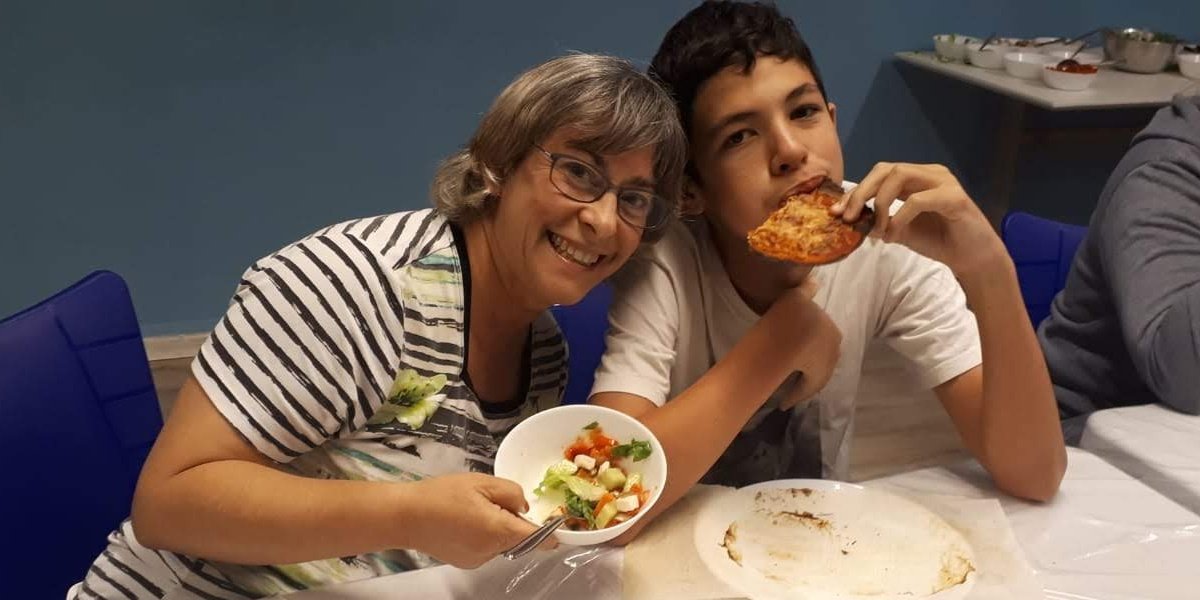 In August 2019 I volunteered at Shutaf Day Camp to be with Aharon, an 8 year old boy with Down Syndrome who can not hear (despite having a cochlear implant). I spent 3 days with him at the camp, after he had been here the previous week. I was asked to stay “attached to Aharon” since he had interfered with the other 10 campers in his bunk and there was not enough supervision for him.

Not being aware of the camp surroundings, I was wondering how I would find the various activity areas. I was surprised to see that Ahron knew the layout of the campus perfectly.  I took notice of his recognition abilities, he knew Reut the girl counselor, and would go over and hug her, sit on her lap during circle time. He knew all the counselors and I believe he could identify all the boys in his bunk.

I was advised that Aharon has food issues. The first day at breakfast, I saw how he gobbled up 2 sandwiches and 3 bowls of cereal. Despite the big breakfast, and activities in between, he liked to be the first for lunch. I was happy to see he did allow me to wash his hands with soap and water before eating lunch. He ate his meals independently, and made it known when he wanted more. At lunch he liked using a spoon for the coos coos.  One thing I discovered quite quickly, was his like for “circle shapes”: he would notice a clock on the wall, my watch, circles on the floor, scotch tape rolls, toys with circles, cheerio cereal, or even a small round hole on a chair or bench.

Ahron’s favorite activity was to move and control things. He would knock over plastic chairs and rock them. He would open and close the doors of the lockers. Running down the hallway and closing all the classroom doors. He was mesmerized by the big plastic boxes (containers) with the hinged cover. These boxes had Lego or beads in it. So instead of throwing the pieces all over the place, I put all the beads into smaller containers, and gave him one box to play with. He repeatedly opened and closed the box. He put his face inside looking through the pink box. He would sit on the floor or lie down while playing with the box.

Aharon enjoyed lying on the floor facing the air conditioning unit which was up on the wall, and also walking barefoot the whole day. Periodically he would take a “time out”, relaxing on the floor and putting one foot over his knee, while sucking his thumb, I assumed he knew when he was tired and needed his quiet time. On the second and third days when he was relaxing on the floor, I sat next to him. He took my hand and put it on his leg, so I tickled and massaged his legs. Since he was barefoot, I massaged the soles of his feet which he seemed to enjoy, as he kept on taking my hand from one foot to the other.

One of the things I did with Aharon was have him put things in a sequence. Once we sat outside by ourselves on a bench and I gave him sticks and twigs to “line up”. He did this several times, while sitting and standing. He found a round hole on the bench and then put the twig into the hole and took it out, doing this several times until he threw all the sticks on the ground. There were papers in the room with big numbers written on them. He took them and lined them up on the floor. He would even line up cut-up styrofoam pieces. Being in an empty classroom he liked to knock over ALL the chairs and line them up and rock a few of them. I would sit on a chair and watch him. Once I got up, he immediately took my hands and led me back to the same chair and “sat me down with both hands”.

Aharon had very little interaction with his bunkmates. He did enjoy the “blow up soccer field”, and he tried it out (he was held by one of the boy counselors) and he even tried to kick the ball. However, when we realized the ball can hurt his cochlear implant, we took him out. So I held him on the outside edge and he liked looking at the playing field. When the bunk had Aikido, I would say this was the first time that I saw Aharon related to the kids. He stood on the mats, and watched the kids fall down, just like he used to lie down in the classroom. He approached the teacher and she “tumbled” him. He went over to a few of the kids and looked at them in their face and laughed.

All in all, I would say Aharon is a happy child in “his own world”. Even when he had a habit of going to a classroom that he remembered from the first week, I would get one of the boy counselors to take him back to his classroom, he would struggle at first, but then agree. Aharon found it hard “to wait” to go into the lunchroom or for the van to go home, but I managed, even if it he lied on the ground.

The only time he reacted to sound was when there was music in the classroom from a speaker on the wall by the blackboard. As he walked by the speaker, he stopped and looked up, and then he continued on. Sometimes he would make a high piercing clicking sound.

On the last day, I was sitting on a chair watching him play on the floor, he climbed on me and sat on my lap, and hugged me. Hopefully, I helped Ahron have a happier time in Shutaf Day Camp.

Category: What our Community is Saying

The Problem of Summer Holidays and Working Parents
June 19, 2017

Screwing Up and Coping
Go to Top