Naked on the Subway 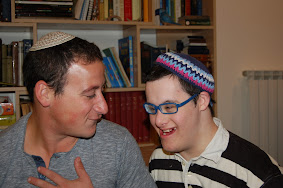 Akiva and his cousin Adam at our family Hanukkah party

There’s been so much written since the shootings in Newtown, CT – it becomes hard to separate fact from hyperbole. The essence is clear, that is, we need to establish and enforce gun control laws in the US- we have needed to for a long time, and that the medical establishment needs to reevaluate how it serves people with mental illness. But do we understand what families need and what individuals coping with disability or mental illness really need? I don’t think so.

I thought about all of this yesterday, as we drove Akiva up north for a Bat Mitzvah in bucolic Kibbutz Hanaton, not far from Nazareth. We listened to music on the way up and got out of the car in a good mood, happy to join the party a bit late but thankfully just in time for the Bat Mitzvah girl’s torah reading. We left, less than 2 hours later, needing to get Akiva home to his house, his familiar turf and away from us. As I said goodbye, I was pretty much tearful, disappointed that it didn’t work out better.

After holding him back so that he wouldn’t touch people too much as part of his efforts at conversation, and sitting next to him at a meal with a family who was pleasant but with whom we couldn’t really speak because of monitoring Akiva, and having my head yanked at or my hand scratched because Akiva clearly didn’t feel at ease, it was time to go.

Ira and I were surprised at how quickly the day went sour – it hadn’t all been bad. We had enjoyed services, Akiva had taken a walk to visit the cows, the day was lovely, kids were running around outside – Akiva likes that – and there was space to breathe, always nice for him. But? It was unfamiliar – most people there didn’t know him and couldn’t therefore relate to his need for friendship and conversation, let alone how Ira and I feel when we can’t even manage adult conversation or seem remotely friendly.

That was the worst part of it for me. I could feel my face kind of taking on that Steinberg frown, when you can’t really smile anyway – it’s an inheritance from my Grandma Rena z”l, a Polish/Russian thing, I guess. I feel like a social outcast, unable to exchange pleasantries or show myself to be a socially pleasant person. Ira says it’s like that dream of being naked in public – on the subway, let’s say. Funny thing is, nobody notices except you.

And you know, that’s how it is. Nobody sees you in those moments of quiet desperation. You can be truly invisible. Sometimes I remember that when I lived in Brooklyn, there were those who knew me before, before Akiva, when I didn’t feel marginalized to the border of the kiddush room or the sidelines of the party or wherever else I try to make Akiva’s behaviour manageable in public. Since we’ve moved, I recognize that as Akiva’s gotten older, it’s even harder to socialize in public settings together. Even if he’s being accommodating  we’re aware of him, or watching out for him, just not at ease. Friends and family will say, ‘get a babysitter,’ when we don’t know if we should bring him to the party, not always recognizing we feel badly to leave him out. Or, they say, ‘bring him, we’d love to have Akiva,’ and they mean it but don’t always want to think of how hard the party will be with him. They just want it to work out, without always realizing the emotions at work.

As for babysitters, we just tried a new one, an adult, who took Akiva on happily until it didn’t go so well. I recognized her frustration – they had a bad ending to a not so bad day, really. When it got too long for him and he balked – big time – instead of evaluating what happened and figuring out how to have a more successful outing next time, she told me that she’ll have to charge a lot more. It’s okay in the long run. Being Akiva’s sitter is not for everyone. I get that – it’s not so easy to find a sitter for a 15 year old boy with developmental delay.

What it makes me realize is that when we talk about inclusion in the community – integration, appreciating each other’s differences, reaching out to the four corners of the room, the school, the synagogue and beyond, what it will really take is seeing, really seeing the truth of what people are coping with and wanting to understand and listen first before we move ahead with the work of understanding need and creating new community paradigms.