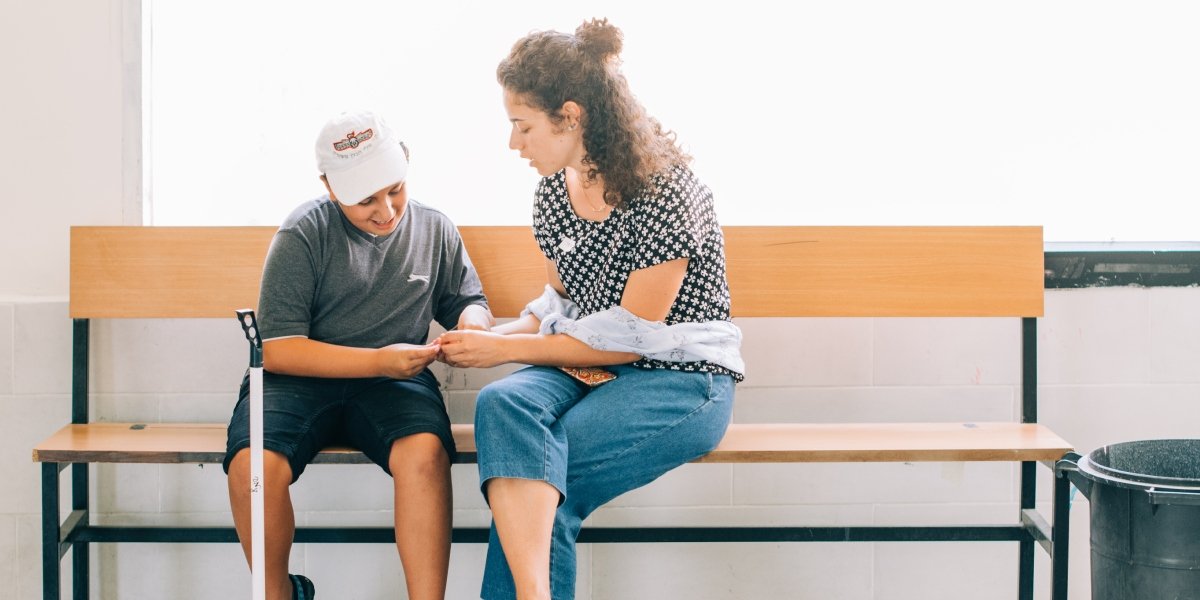 What about families raising a child with a disability? Preparing a child or teen with special needs for the noise, the rush and the fear that accompanies a tzeva adom or Red Alert is something that families in Israel’s southern region deal with daily. If a child has sensory issues, they may close down at the first sound of the siren, or worse, freeze in place, unable to move. An older child can’t be swept up and carried – parents, family members and caregivers need to be exceptionally savvy and calm under extreme circumstances.

On Friday evening, at 4:45pm, the first siren in more than 30 years rang out in Jerusalem. We had just stepped out with our son, Akiva, who’s 15 years old and has developmental issues, on our way to synagogue. We looked at each other in shock and were thankfully able to get back into the house without Akiva totally realizing what had happened. He was confused but mercifully compliant although he balked initially at returning to the house.

When we addressed leaving the house about an hour later, we thought carefully about how to talk about it with him. Akiva is strong and capable and known for stopping in his tracks if he’s moved too quickly – that is, without preparing him. We came up with two plans. Plan One? We told him that if there was a ‘big noise’ we’d run ‘chick-chock-a-roo’ into a building. Akiva who likes certain kinds of words, responded to that with a smile and seemed reassured. Plan Two? Ira would push him down to the ground with my help – as safely as we could – and one of us would lie on top of him, sheltering him as well as themselves as best as possible. While we walked to friends for Shabbat dinner, we repeatedly went over the plan. If we lived in Beersheva, or Ashkelon, or Ashdod, we would have done a real-time run through of what we’d planned in order to ensure that Akiva would have been as familiar as possible with what to expect.

Another family in the neighborhood, parents to a teenage daughter with special needs who is particularly sensitive to noise and emotional upset, immediately began discussing the what ifs, like what if there another siren, or worse, a siren at school? She was able to express, “I’m afraid of a siren,” but, as the mother described, she was already worried about her daughter, knowing how she might perseverate over this frightening moment.

I spent some time this week strategizing about this new reality with members of the Shutaf team, the Jerusalem-based inclusion program that I co-founded with Miriam Avraham. Program director Marci Tirschwell commented that it’s important to strike the right tone with kids, regardless of disability, one that takes into consideration their age and way of relating to the world around them. “The bottom line? Talk to the kid and be honest without being alarming,” Tirschwell explained and say, “I’m going to show you where you have to go – you will be safe. Tell it like it is in a simple way so they can understand it at whatever level they are at.”

Another Shutaf parent, Lisa Arya, described the conversation that she had with her daughter, Gabriela, who’s 14 and has developmental and communication issues. First Gabriela said, “I don’t know,” when asked how she would react if a siren blew. Lisa said “we talked about the details of going downstairs, like lock the door or not and take the dog or not?” detailing a plan for coping with all the eventualities, including the social setting of the shelter which is perhaps more stressful for Gabriela than the actual siren.

Arya, who has two sons serving in the IDF, said that she is careful not to overreact about things for fear that Gabriela will mimic her reactions. Gabriela asks about her brothers’ safety but is reassured by what she’s told. “The reality is too abstract for her,” says Lisa, unless she sees newspaper or Internet imagery that might make her relate in a more direct way.

Encouraging a child to express their worries, or watching for behavior that suggests stress is important as well. One parent described it as being a detective, looking for clues or suggestions that everything isn’t right and then responding in a calm and informative fashion. If a child isn’t showing signs of concern, or isn’t capable of engaging in a conversation, parents can still talk about it with them, or even prepare a series of simple images that will offer them something familiar with which to relate during a red alert. “Preparation,” says Tirschwell, “it all comes down to preparation.”

Changing your Mindset: How to Include Everyone
September 14, 2020

Challenging Behaviors: How Do You Problem Solve?
September 14, 2020

A Star is Born? (I hate when my child has to peform)