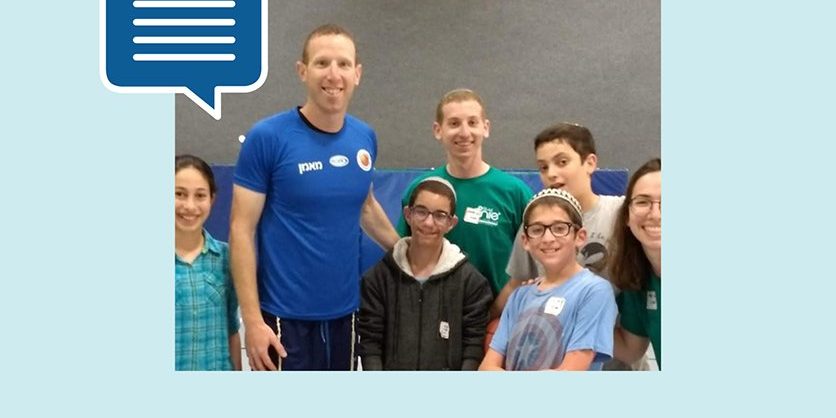 Stepping through the open doors of Camp Shutaf is like entering into a whole new world. Shutaf is a world filled with laughter and playfulness and love.  A world that brings about smiles and glowing faces, created for the sole purpose of spreading happiness.  Everywhere campers pile onto their beloved counselor’s backs, and make themselves at home in their counselor’s laps.   The joy overcomes you and inspires you to find a way to pay forward the warmness that surrounds the camp.

The best way to describe the Avatiachs, or “Watermelons,” (one of the Shutaf camper groups), and that includes the counselors, is that they are overflowing with energy.

A day in the life of an Avatiach:

After proudly chanting their bunk song in front of the other groups in camp, the overjoyed Avatiachs begin their day by receiving jobs.  Each camper receives a responsibility for the day, which they proudly wear as watermelon-shaped necklaces, ranging from “giving out cereal” to “making sure no one complains.”  The Avatiachs work as a group, each camper is a cog in the wheel that keeps the bunk running.

The first activity of the day was Sport. The sports counselor began with stretches followed by a game of hopping on circles and throwing a soccer ball into a hoop.  The cheers of the Avatiachs could be heard across the camp.

The hot, red-faced Avatiachs then headed to Art.  The minute the highly energized Avatiachs entered the art room they were overtaken by the calm aura of the art instructor.  They made people, animals and stars that were attached to boards making their works of art pop up when pushed down.  The concentration and creative vibe in the art room were clear on the Avatiachs’ faces.

Afterwards, the Avatiachs and all their energy took their lunches outside to the big playground where they swung on swings, climbed ladders and slid down slides.   It was incredible to watch them help each other navigate through the playground tower.

The last activity and perhaps the most exciting was Animals. The campers listened carefully as the animal-activity staffer described the differences between people and animals, and shrieked loudly when he put a goose on the floor for the campers to pet.  The goose did not stay for long.  The campers did however have a lot of fun passing around and giving names to different types of hamsters and rabbits.

The Avatiachs are a fantastic group!  The campers were so kind and excited to be with each other, it did not appear that any camper could possibly feel left out.  In other words, the Avatiachs are like one big, happy family.

After a camp day filled with one fun activity after another, if all the Avatiachs don’t collapse on their beds when they get home, I can definitely assure you their counselors do.

You can tell by the excitement and craze this morning around camp that it is the last day.

For me, it is a bittersweet day.  While the campers enjoyed a day full of activities- (animals, “Super Charlie” and his amazing circus, a messibut siyum where they performed and watched their friends act, sing and dance,)- I sat with my computer in the middle of the Merkaz Kangaroo building, writing up my last thoughts on camp while receiving many visits from the many campers I befriended during my time here at Shutaf.   Campers with beautiful hearts and bright futures, who gave me the chance to add meaning to my summer, to give back to the land that has given so much to me.  Campers I truly feel indebted to for welcoming me so warmly at Shutaf.

Two years ago, I came to Israel for ten months for selfish reasons.   I came to study the Torah and tour the amazing country, to find myself in the land of my forefathers.  I came for me.  This trip, I wanted to come for others, to help and return some of the amazing experiences that Israel has given to me.  I am on track for a major in journalism at the University of Maryland, and I figured the best way to give back would be to use my best skill, writing.  After coming across Shutaf, with help from Skilled Volunteers, I sat with the directors at Shutaf and we decided that I would follow a different bunk every day and write about my experience each afternoon for the camp’s blog.  After my first day, even my first hour at Shutaf, I discovered the magic that lives within its walls. The camp is like an oasis in Tzomet Pot; like a big heart beating in the center of Israel.  Since then, I have done my best to expose Shutaf for the amazing home it is.   I am extremely grateful to the Shutaf staff and campers for giving me the opportunity to take part in something so incredible this summer.

Once again, however, I feel selfish.  I have been so blessed to be a part of a camp like Shutaf.  The counselors and campers are a different breed from the average person; they emanate love and warmth.  The counselors come to camp with such high energy, they completely set the mood for their bunks for the day.  The campers look up to them so; you can see it by the way they always want to be close to them, showing them the projects they did, sitting on their laps, hanging off their backs.  The campers also show such love and respect for each other – what a special camper it is that attends a camp like Shutaf and wears a sincere smile all day.  The counselors love their campers and the campers absolutely adore their counselors.  You can feel the mutual closeness in the air.  I felt blessed to be able to have watched and experienced such a connection.

Shutaf is such a special place.   I have gained so much from working here.  It was an experience I will never forget, because Shutaf will be in my heart forever.  I only wish the best for the future of Shutaf, a future I hope I can be a part of.