“The Embodiment” and “Gratitude” – Guest Post by Dana Robbins 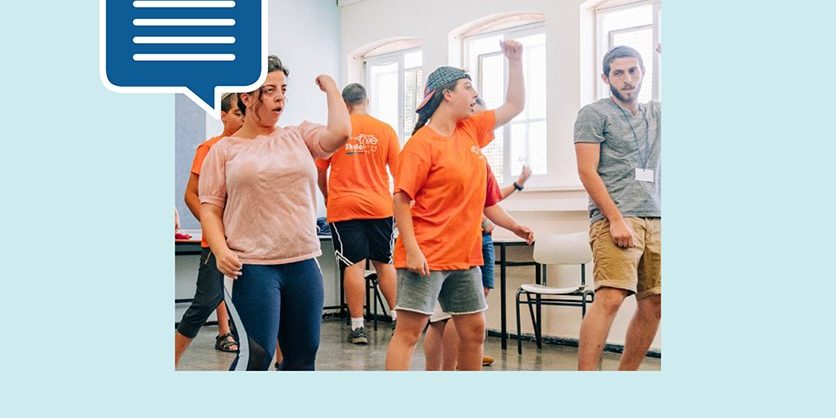 Dana Robbins (right) and her mother

It was not easy walking into a gym thirty years after the stroke that left my left side spastic and weak, when, well into my fifties, I resolved to tackle the excess weight that age and too much time in front of my computer has deposited around my middle and lower half. At first, I felt painfully self- conscious about the drag of my left leg and the awkward way my left arm pulls upward toward my shoulder. I was frustrated that some of the machines are impossible for me. Over time, I have learned not to compare myself to others and to focus on doing my personal best. Usually, I begin on the bicycle or the treadmill, then progress to the nautilus machines. At the end, I do a brief agility training that involves walking sideways and making boxes with my feet. I call it my dance. Sometimes I laugh when I catch sight of the middle-aged fluff ball who is doing these strange movements.

At the gym, there are the usual range of body types and people: the slim and toned, the painfully thin, the soft and round, the elderly and frail. And then there is the man with the missing limbs, both his legs amputated, bandaged, just above the knee. His limbs stick straight out from his wheelchair like upended bowling pins. I saw him yesterday as his aid placed him on the nautilus. I used my right hand to hoist my weak left leg into position on nearby equipment. As I did my leg extensions, my difficulty seemed minimal by comparison. I looked in his direction and the faintest hint of acknowledgement passed over his face. He has sparse white hair and a powerful torso. He is old but not ancient, maybe seventy. He looks like the kind of man who once wore a suit and headed up a business. His hands, resting on the bar, are balled up, fists without fingers.

I want to say something friendly but his face, scrunched with will power, says no admittance. A bolder person would get right in there and say hello, but I know all too well that kindness can carry a hidden undercurrent of pity, condescension, even dread. I remember how often people would tell me it could be worse, as I, twenty three and disabled for life, fuming thought, yes, I could be dead how much worse could it be. I painfully sensed that even the compliment “you are so brave,” really meant, “and I’m so glad I am not you,” How well I understood what they did not or could not conceal, that my broken body was the embodiment of their fear.

I got tired of healthy people telling me to make the best of it. Did they think I didn’t know that? I loathed the military metaphors; people telling me to be a fighter, to give my all to the battle. The problem is that this kind of thinking gives rise to shame, as if disability is laziness or weakness of the will, as if health is just a matter of trying harder, one more prize in our competitive society. This is why I cringe when I see the advertisements, where a person grinning or looking resolute, announces, “I beat cancer.” Some people will not “win.” Does this make them “losers”? It is bad enough to be ill or disabled, how much worse it is to be branded a “loser,” too. These metaphors obscure the essential truth that some circumstances just aren’t within our control.

In many ways healing is a process of coming to terms. The key word for me is acceptance. Acceptance does not mean liking it. Every day a part of me mourns that I cannot run, jump, swim or dance, that there is not a single craft I can manage, because knitting, crocheting, quilting require two hands. And I will be forever pissed off about it. I think that it is possible to accept an illness or disability without giving in to it. Spiritual acceptance can coexist with a healthy and motivating sense of indignation, even rage. Thus, I am not persuaded by the people who say things like “my illness was a gift.” I find myself thinking “are you kidding?”

Illness is not a battle or a sport, and healing is not a war, but a journey to a destination unknown As Susan Sontag says, “Illness is the night side of life, a more onerous citizenship. Everyone who is born holds dual citizenship, in the kingdom of the well and in the kingdom of the sick” (Sontag Susan, Illness as Metaphor, p. 3). I know in my heart that this journey has changed me forever, leaving me with my own unique blend of wisdom, hope, and anger at the so called “normal” world.

I don’t know anything about my compatriot in the wheelchair but I salute his courage. I try to catch his eye to nod as I did the day before, but he is stone-faced. I wonder if he is protecting himself against the insensitivity of others. He stares grimly ahead and I must honor that. Perhaps tomorrow, I will be able to speak to him.

My weak leg cramped after seven hours in the airplane seat, I walk bedraggled
and haltingly, in the hallelujah moment of safe arrival as the kind steward helps
me off the plane; much younger than I, he pity-flirts with me, then urges me

to use a wheelchair. “I’d rather walk after sitting for so long,” I say, as I pass
through a gauntlet of a dozen wheelchairs lining the hallway with porters
standing by. “Do you need help, ma’am?” they chorus. I repeat my explanation,

remembering my slow pilgrimage through the stages of survival after the stroke:
how I began in the ICU, flat and immobile within a maze of life-giving tubes,
then moved to a bed, where I pulled myself up to sit by grasping the “monkey bars”

suspended above me, until I gained strength enough to be pushed in a wheelchair;
I trembled the first time, sensing prison between its aluminum rails, felt like an infant
on a potty as I use a commode chair and a shower contraption with a hole in the seat.

After months crawling across therapy mats like a penitent at Lourdes, my limp leg was
encased in a hip to ankle cage for the slow lurch between metal bars; next, a walker,
then a four pronged cane, then a standard cane, until finally, I walked unaided.

How would the people who offer help in the airport know that to me the apparatus
of disability has all the appeal of the electric chair?
As I limp past the stations of empty, waiting wheelchairs, my eyes fill as I picture

one that may someday again have my name on it. After the long passage through
customs and baggage, the cool air touches my face and, although it is midnight,
I am still on my feet.

After graduating from Wellesley College, Dana Robbins received a J.D from Columbia University and practiced law for 28 years. Upon retirement, she entered the USM Stonecoast Writers program from which she received an MFA. Dana had a stroke at the age of 23 and often writes about healing.  Her poetry and essays have appeared or are forthcoming in a number of journals and publications, including Drunken Boat, Jewish Women’s Literary Annual, and The Examined Life of the University of Iowa Carver College School of Medicine. She has won several awards including an honorary mention in the 2013 Fish Poetry Contest.

Dancing from Our Hearts. Guest Post by Shelly Christensen

What has disability done for you?
Go to Top